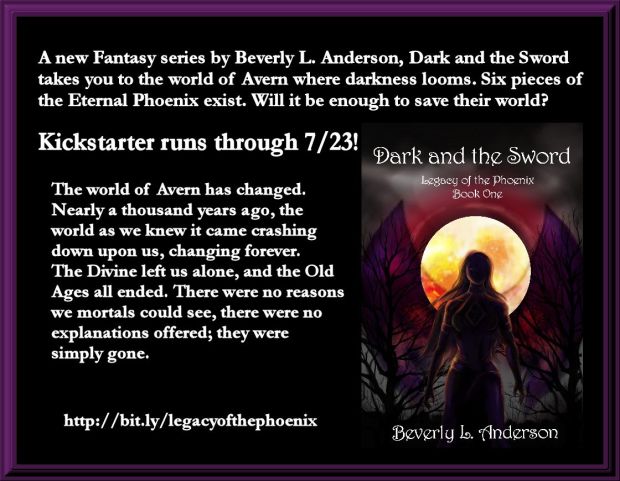 Kickstarter goal has been made! Rewards are still available through July 23!

Please share if you can, I would greatly appreciate it.

The world of Avern has moved on. It has been almost a thousand years since the day the entire pantheon disappeared. Since the Abandonment, the mortals have learned to live without gods and goddesses. The world became mundane with little magic, and even less hope. Tyrants have risen, and those able to wield what is left of magic are powerful. Forces surge in the darkness that threaten to topple the already fragile world. The plight of the world of Avern is not unknown, however, and those that watch from a distance have decided to intervene. The mortals are sleeping, however, unknowing that two great powers will soon by vying for control.

Then something happens that changes things. A young princess makes a bid for power by murdering her father. She then attempts to murder her sister, the crown princess of Lineria, Keiara. Despite a true strike, aided by dark powers, Keiara doesn’t die. Instead, the strike pierces the barrier between her human soul and the soul sleeping within her, the soul of the Dark Phoenix. More than a goddess, the Dark Phoenix is the legendary mother of the gods. She is a part of the Eternal Phoenix that brought life to their world eons ago, one of the primal forces of the cosmos.

1,053 spam blocked by Akismet
Lucid Being💫

The Art Or Endeavour Of Being Lucid In A World We Live In... Secrets Of The Psychics... Energy, Universe, Futurism, Film, Empowerment...Digital Abstract Art Rendering...

Blurring the lines between poetry and prose

Speaking Out on the Unspeakable

Curious and questioning, always the student.

Submit your story logline and showcase it on this network. Or, submit to get your story made into a Video Pitch

Submit your logline pitch and we'll make sure it gets seen be 1000s. Over 1 million plus combined twitter and facebook followers

Never get lost in the Sauce

All of my favorite things, in a Book!

Rebelling against a culture that values assimilation over individuality.

The David and Christina Show
Flash-365

Oh! Take a shit, read a story. - My Mother on flash fiction